All you want is Greece!

For general information about traveling to Greece please see:

About the Epidemiological situation in Greece please see the map:

Thessaly - a journey from antiquity to the present day

According to Greek mythology, Thessaly is the land of the mythical Centaurs, the birthplace of the hero of the Trojan War Achilles, the father of Medicine Asclepius and the area where the battle between the Titans and the Olympian gods took place. 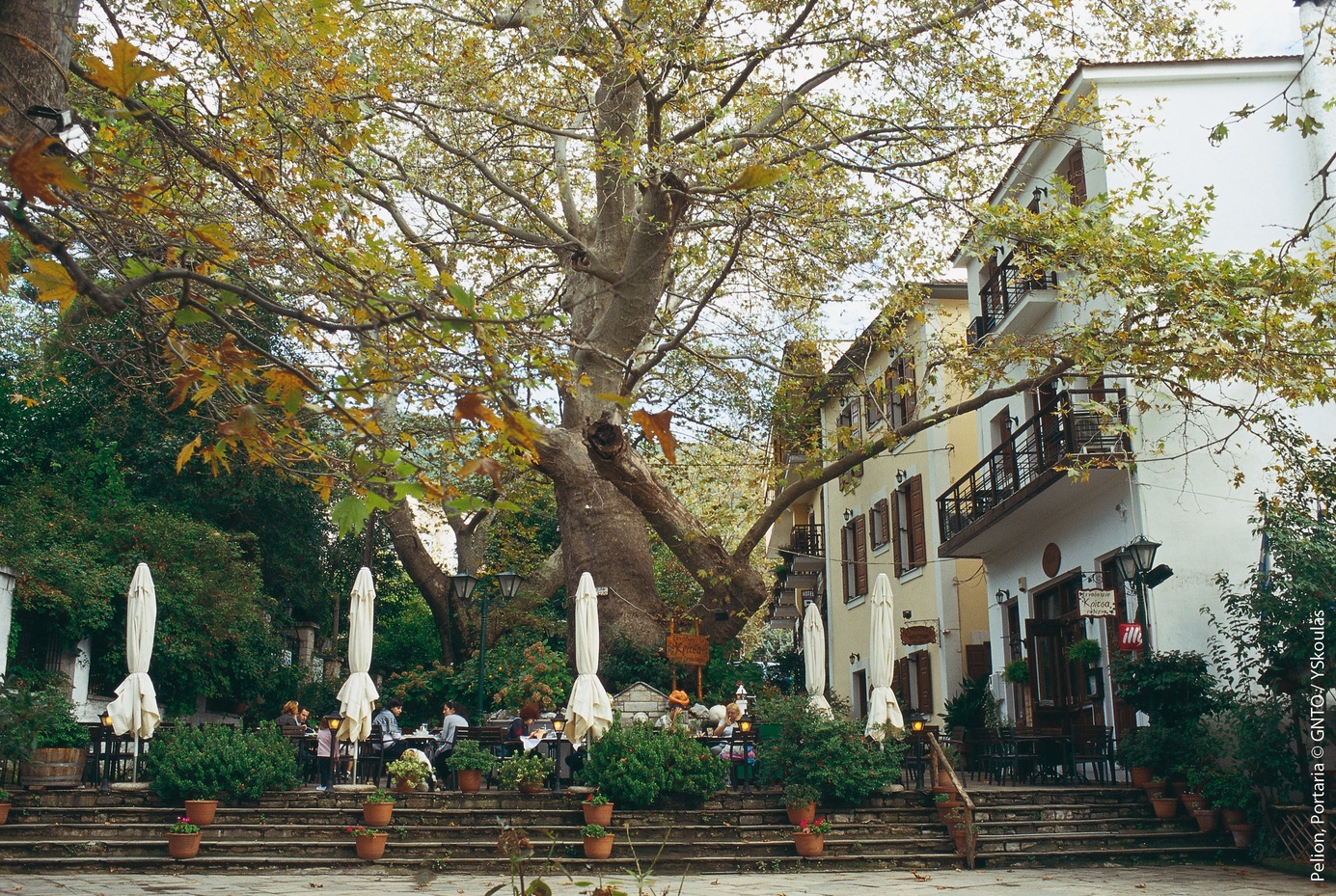 Larissa is a city where ancient history and long tradition in agriculture meet the modern way of living. The soil of the area is exceptionally fertile: cotton, grains, watermelon, melon, tobacco, vegetables, wine are only some of this land’s agricultural products.Walk all the way to Larissa’s busy commercial centre, which is developed in an extensive network of pedestrian streets. Go out on a late-night, or morning shopping; shop for you, your family, or your home, and stroll slowly around the city-centre. Combine your shopping experience with a visit to the Archaeological museum, or the Historical & Folk Art museum and the Municipal Library. When night sets in, discover the city’s bursting night-life in its numerous bars, night clubs, and interesting music scenes. For sure you will fall in love with the traditional Thessalian cuisine: a great variety of delicious meat dishes, a collection of the best Greek cheeses, wine and famous Thessalikotsipouro (tsipouro fromTyrnavos). 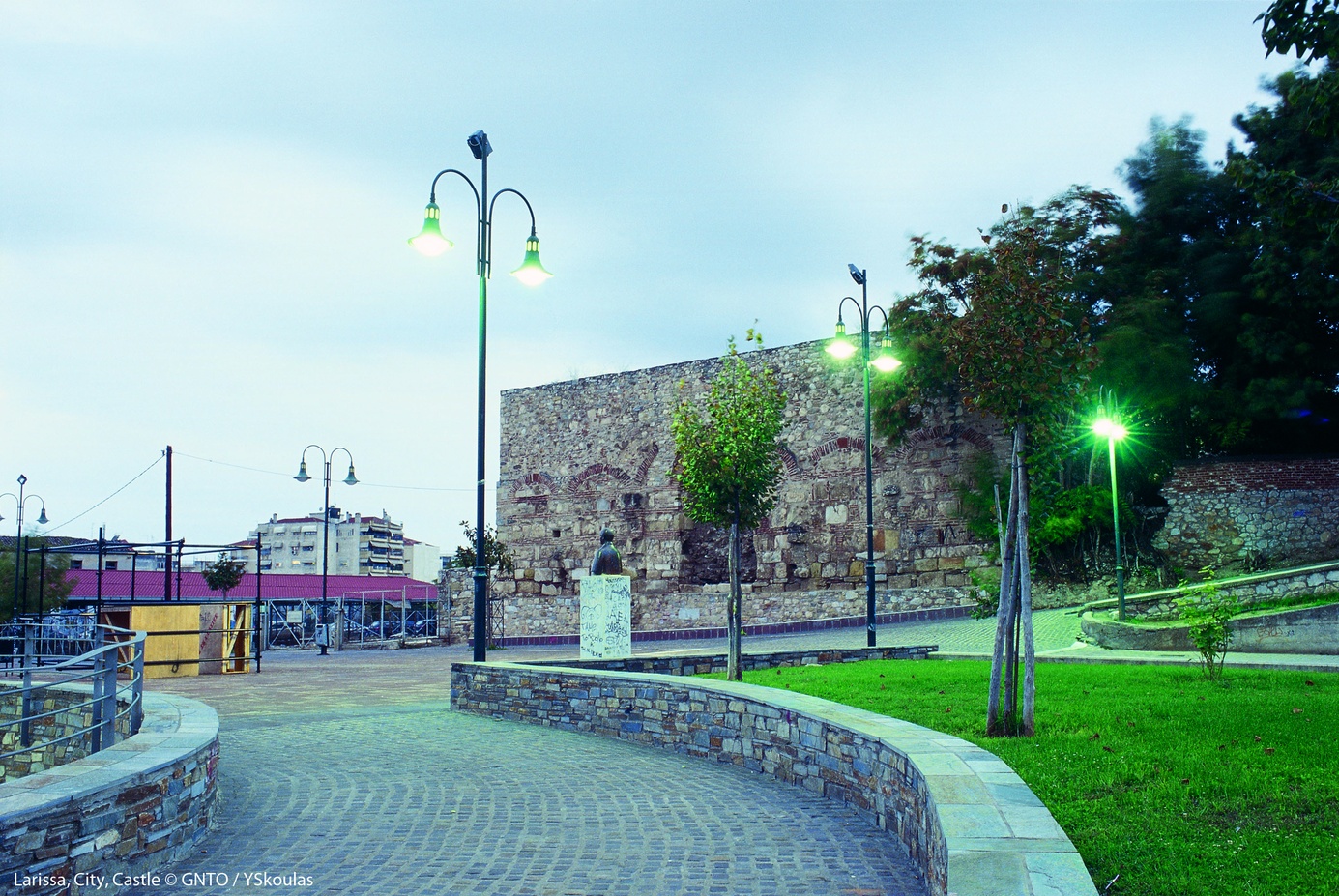 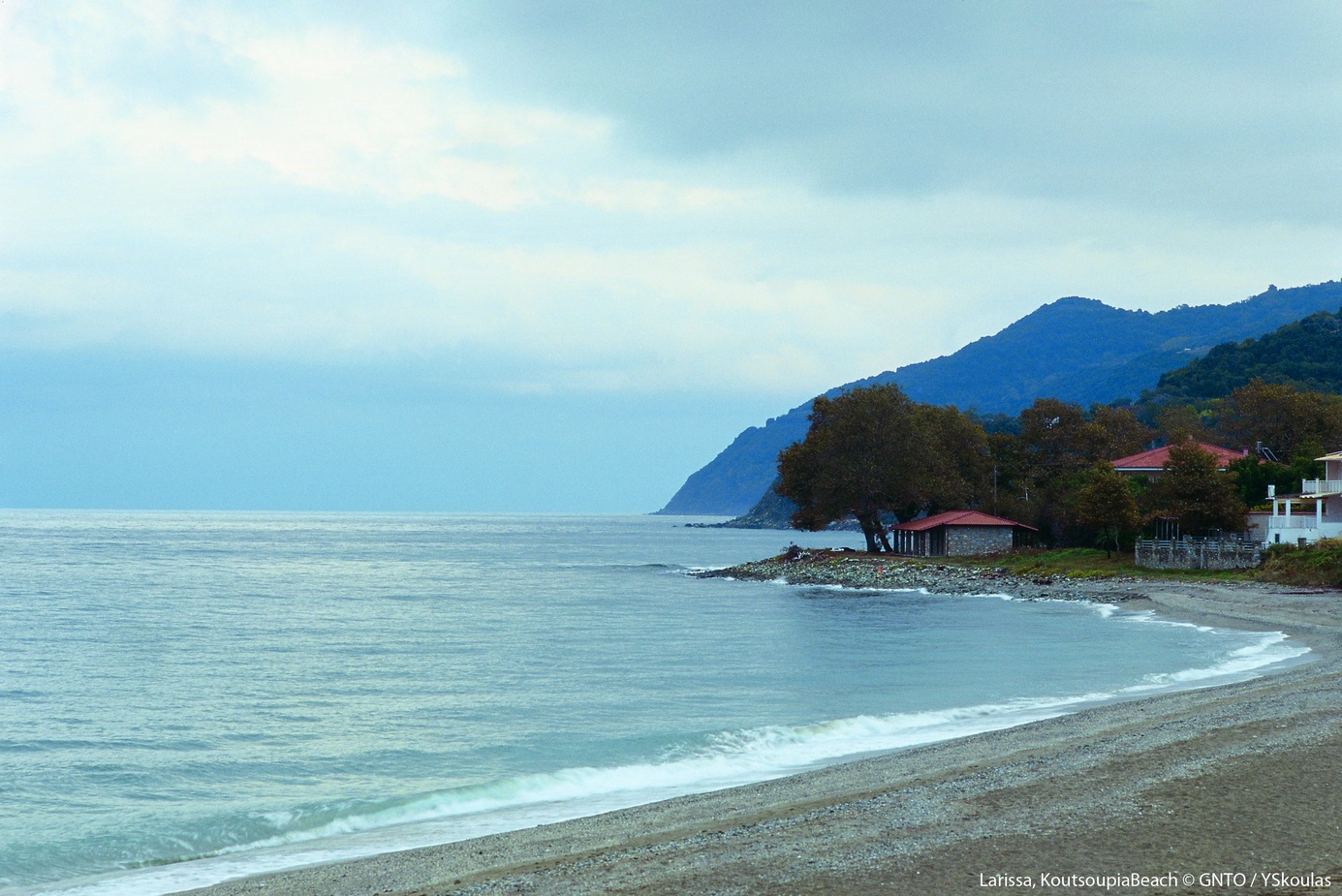 Volos is situated 320km N of Athens and 219km S of Thessaloniki. The modern-day city, built near the site of ancient Iolcos, dominates the region of Magnesia.

The sights in Volos are so numerous that the visitor will feel his day is more than full. Follow the paved Argonauts Avenue on the seafront and go all the way to the port on its western side, just as the locals love doing when in the mood for a romantic stroll with a stunning view to the open sea. Beyond doubt, this is the most impressive corner of the city, embellished not only by fishing boats and yachts, but also by an exact imitation of ancient ship Argo, constructed by faithfully following reports and ancient texts. The modern Argo, a brilliant feat of shipbuilding, will fill history lovers with excitement. 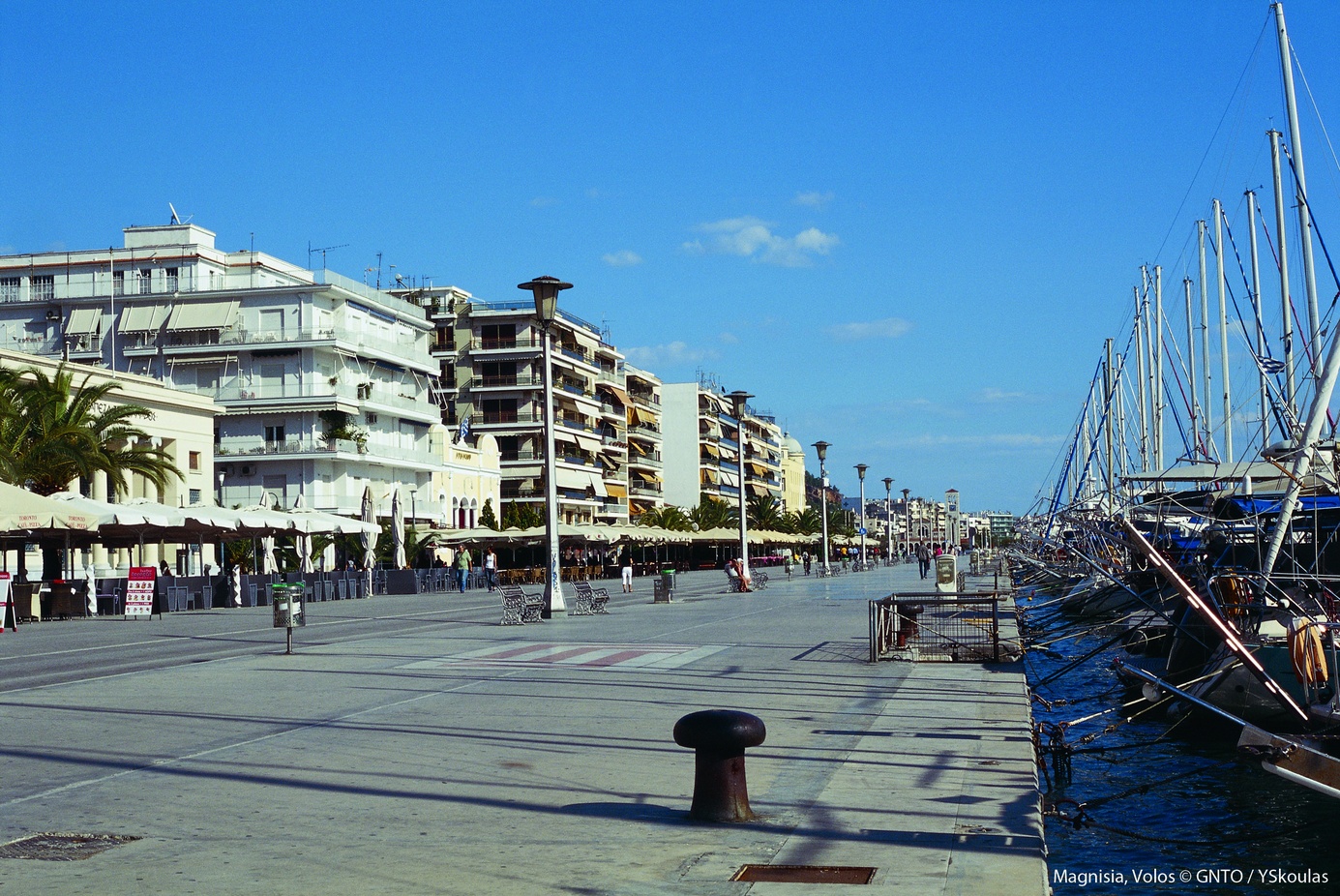 When you mention Volos, Mount Pelion is the first destination that comes to mind. Pelion forms a natural borderline between the district of Magnesia and the Aegean Sea. Its soft slopes and easily accessed peaks make Mount Pelion a popular destination for hiking lovers and weekend mountain climbers. 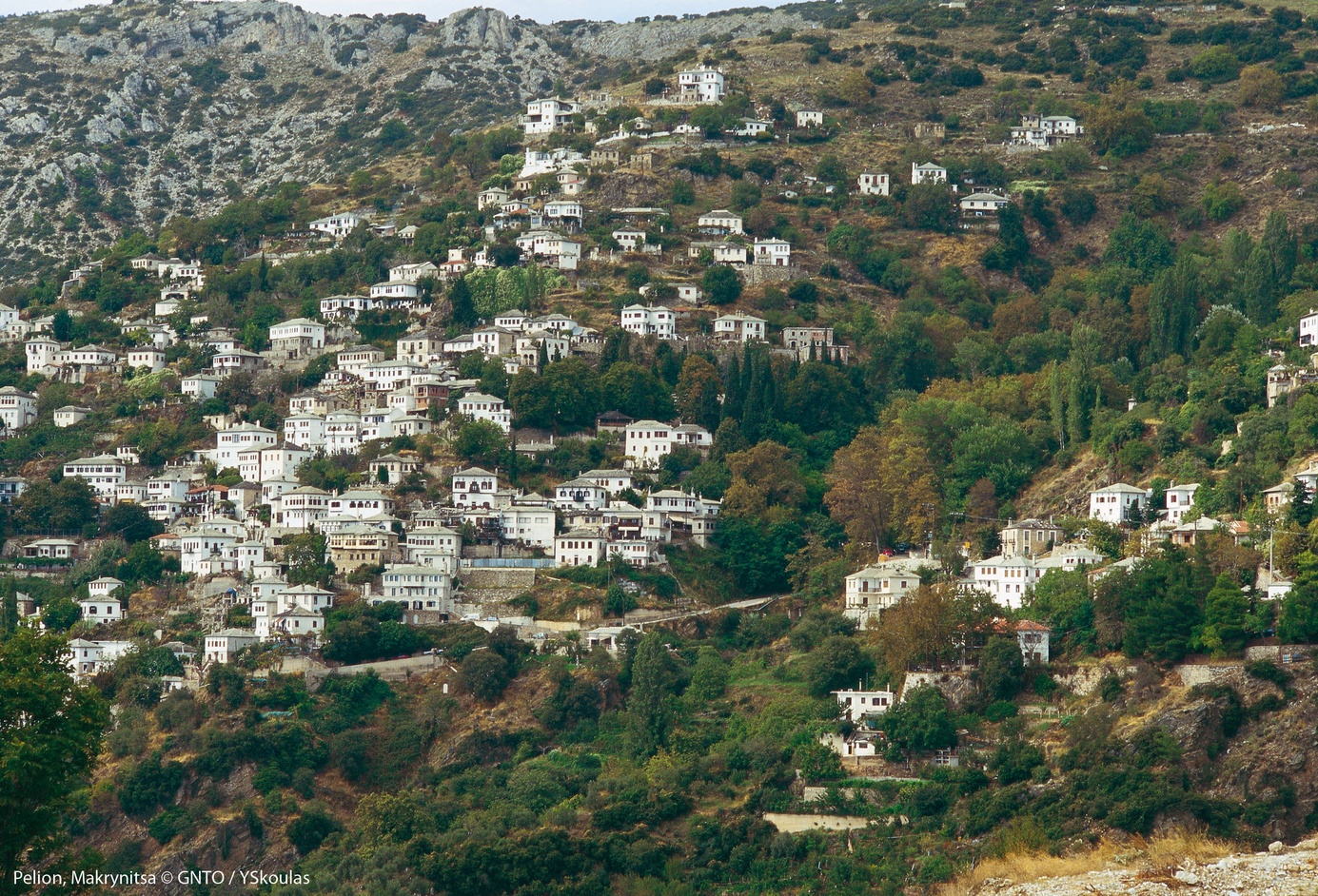 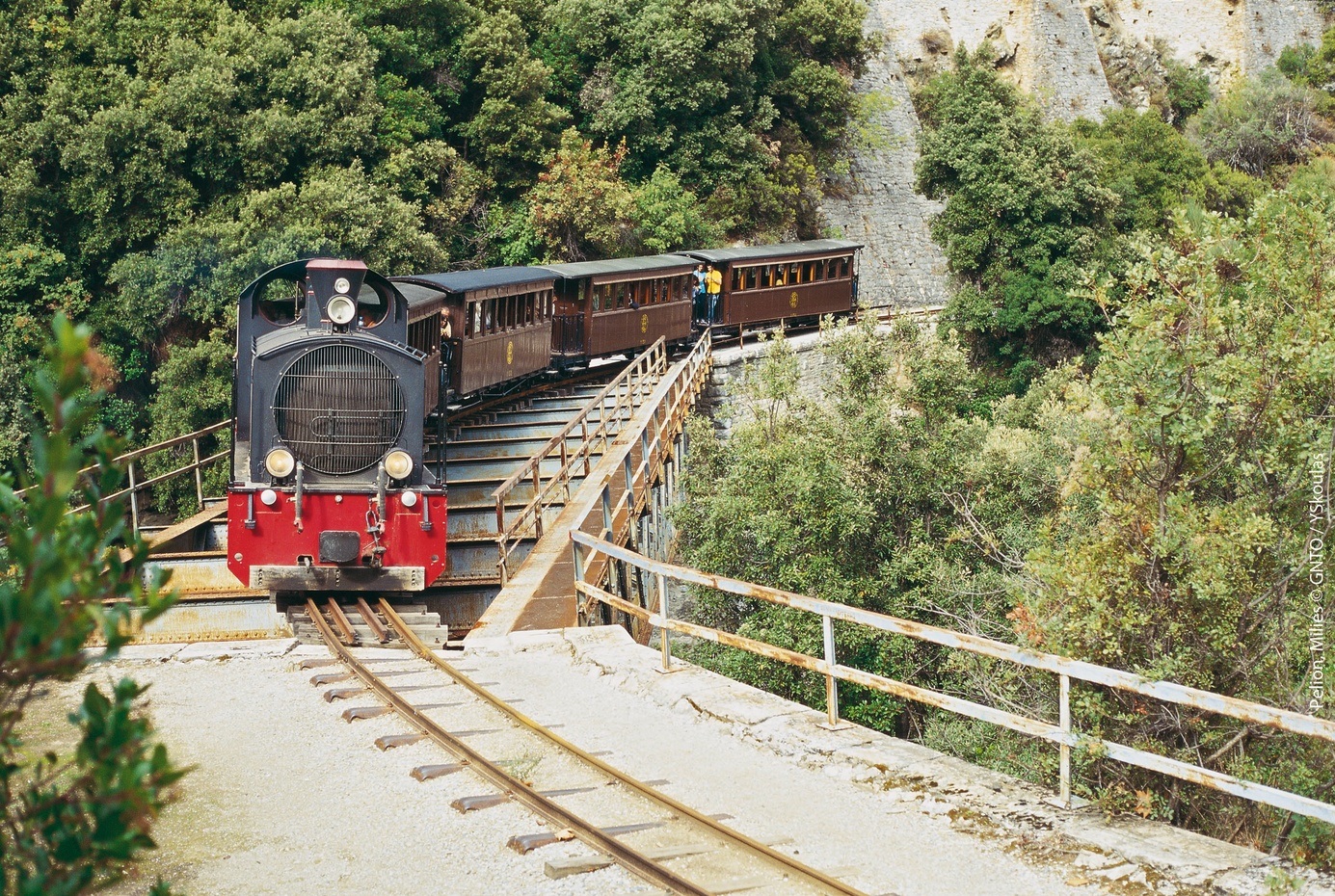 Let’s walk around Trikala – a beautiful city,which is located at a distance of 331 km NW of Athens and 215 km SW of Thessaloniki, and was built on the location of ancient Trikki. The nymph Trikki was the daughter of Pinios, according to mythology. Asklipios, the most important doctor of antiquity, originated from here.

We are starting off with the heritage listed traditional neighbourhood of Varoussi, known for its beautiful narrow alleys and the multi-coloured houses of the 17th, 18th and 19th centuries. Most of the oldest churches of the city are here.Go on with a romantic stroll along thebanks of the Lithaios River, which is a tributary of the Pinios.Walk up to the fortress towering above the hill north of the city. It is the well preserved Justinian fortress, today featuring a recreational area. On its east side there is the 17th century Clock, the emblem of the city, which has suffered destruction and restoration several times. 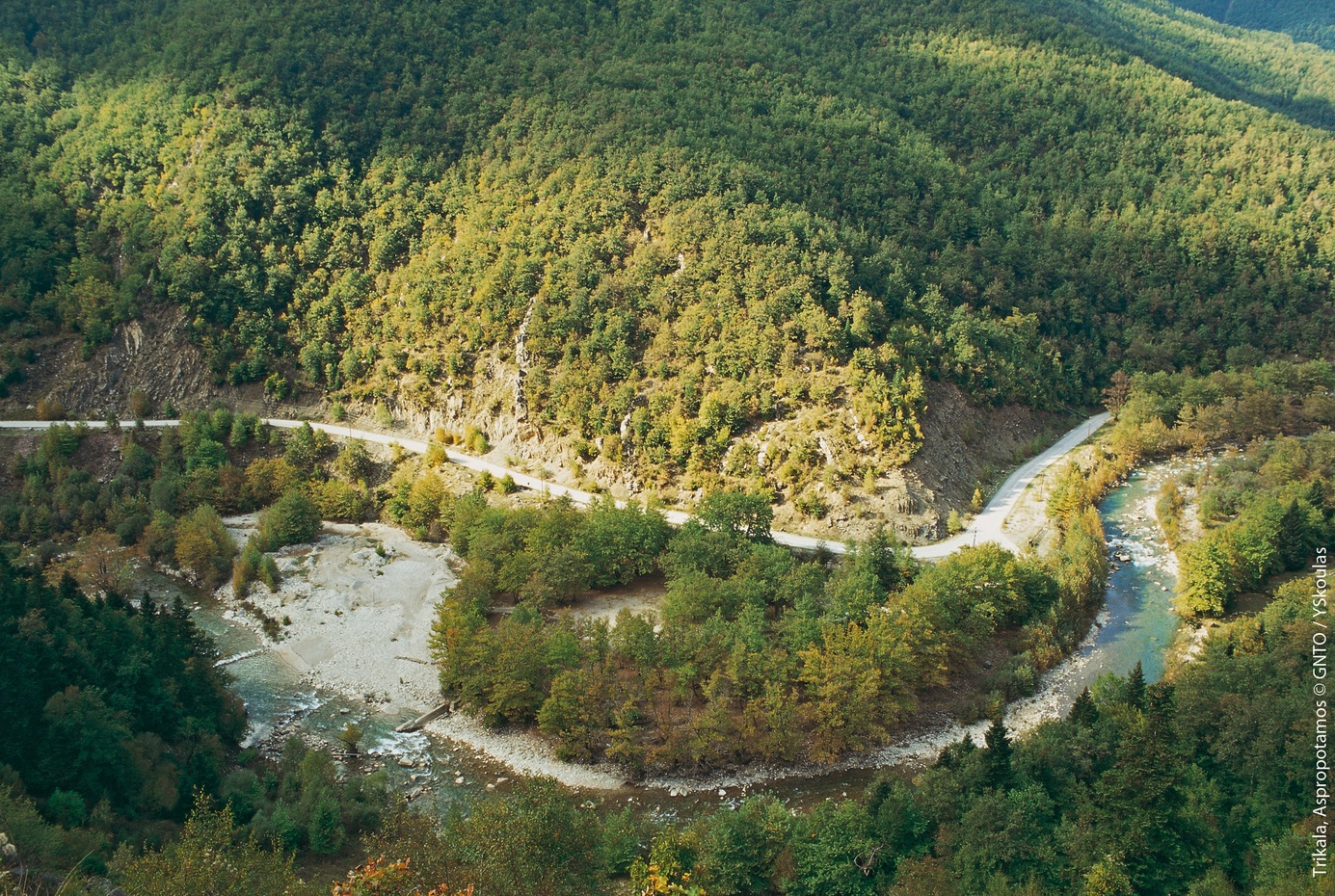 Meteora flourished as a monastic centre between the 13th and 14th century as many people who lived in the nearby areas embraced the monastic way of living.Many years ago the only way of accessing the monasteries of Meteora was by climbing. Back then this meant that you have to strive for isolation and pursuit of God. Nowadays this is considered to be an alternative activity and the best way to enjoy the uniqueness of the landscape. 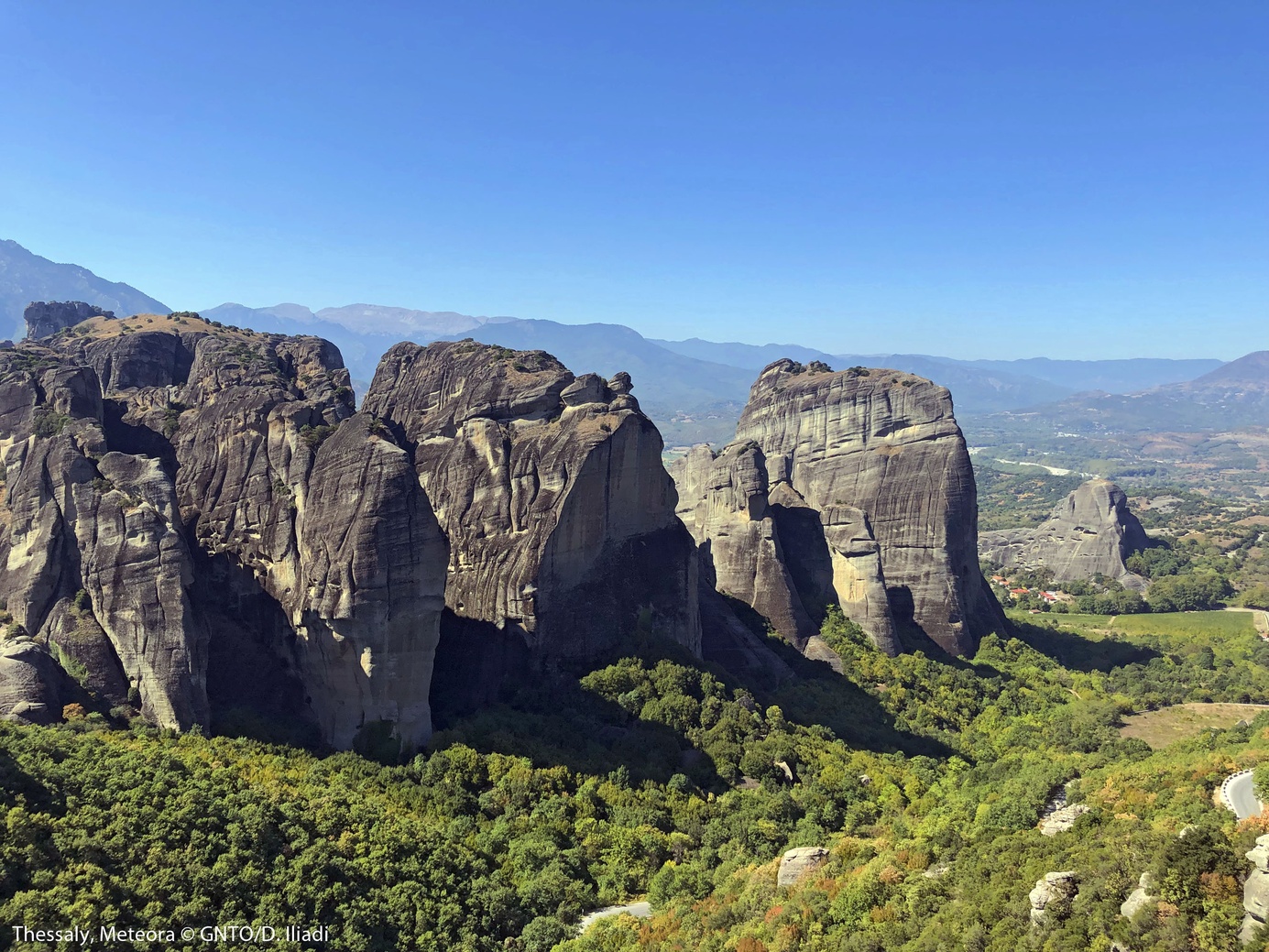 Kalabaka:The word “Kalabaka” originates from Turkish and means “strong fort”. The ancient city Aiginio, which was called Stagi (a name that the Metropolitan church still carries) during the medieval times, was located at the same place. The modern city has a very good street planning, large squares, wide roads and developed tourism due to its position next to the popular Meteora. 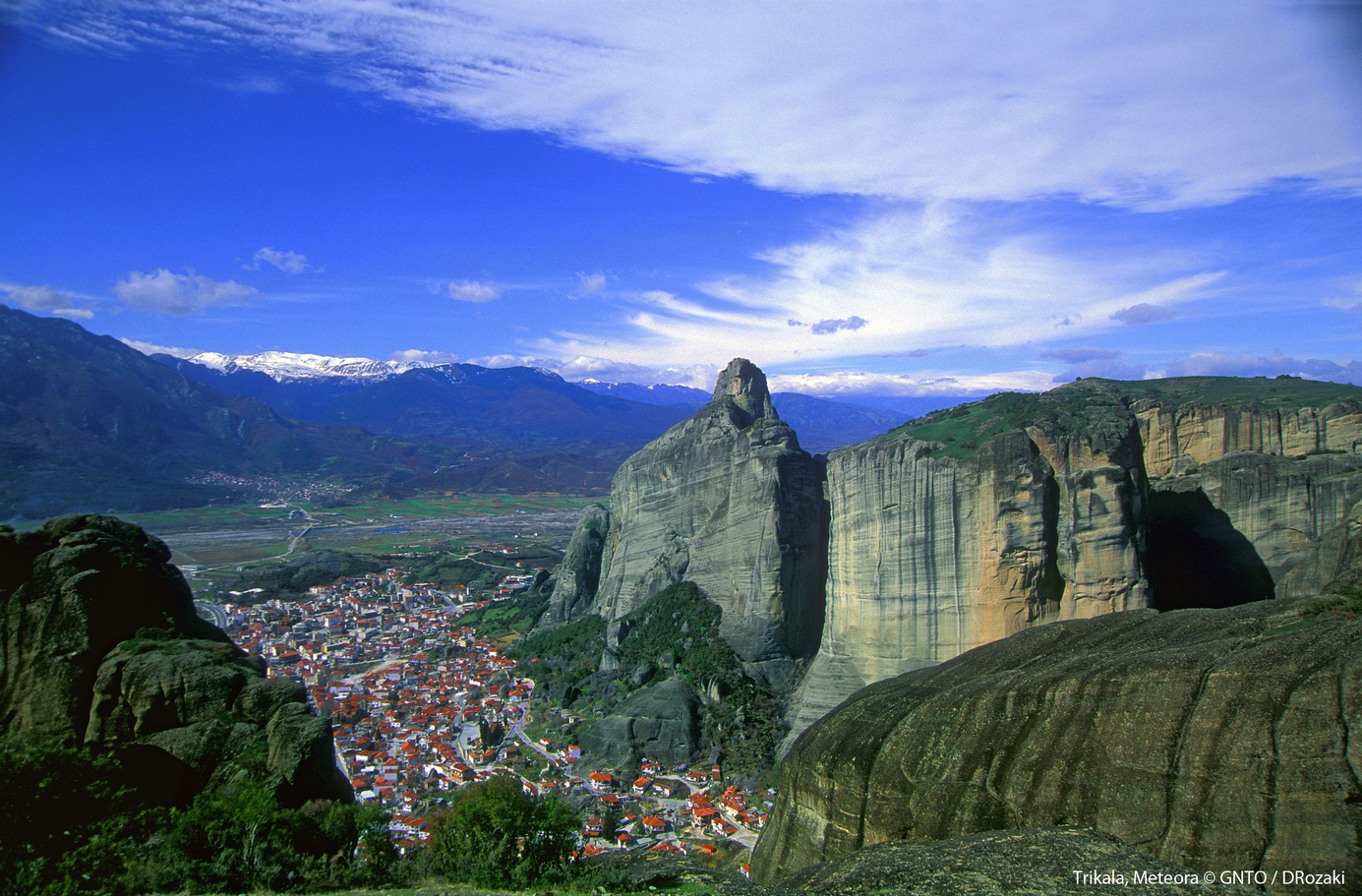 Karditsa is located 303 km NW of Athens and 228 km SW from Thessaloniki. It is built close to tributary of Peneus River, in an area perfect for commercial contact between the plain and mountain area (31.000 inhabitants). This is one of the reasons why it is the rural center of Thessaly products (cotton, wheat and products of cattle raising) collection and distribution. With its two big squares, the huge park and beautiful pedestrian precincts, Karditsa gives to its visitors the opportunity to go around the city by bicycle (it has a wide network of bicycle streets) and enjoy its beauty. 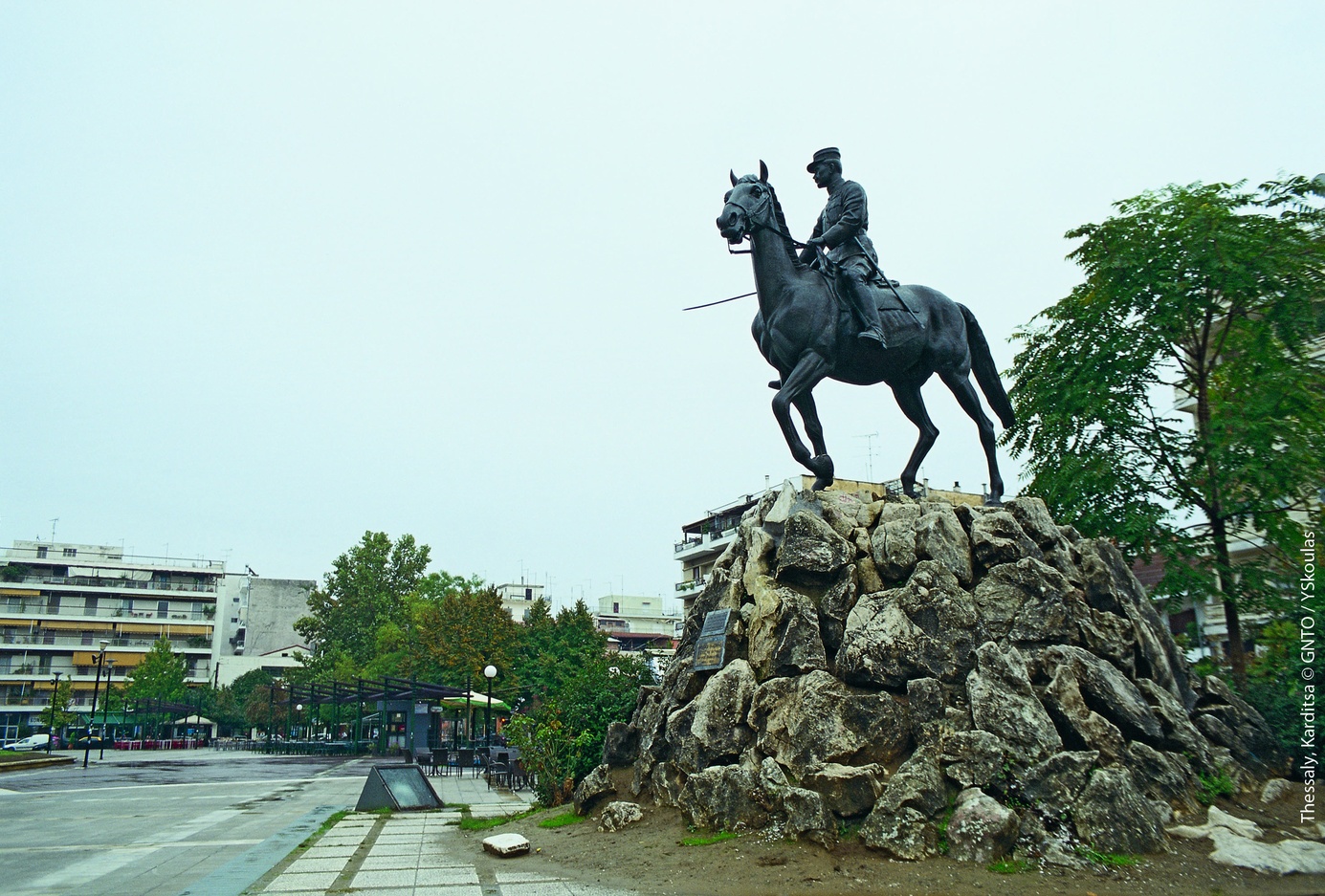 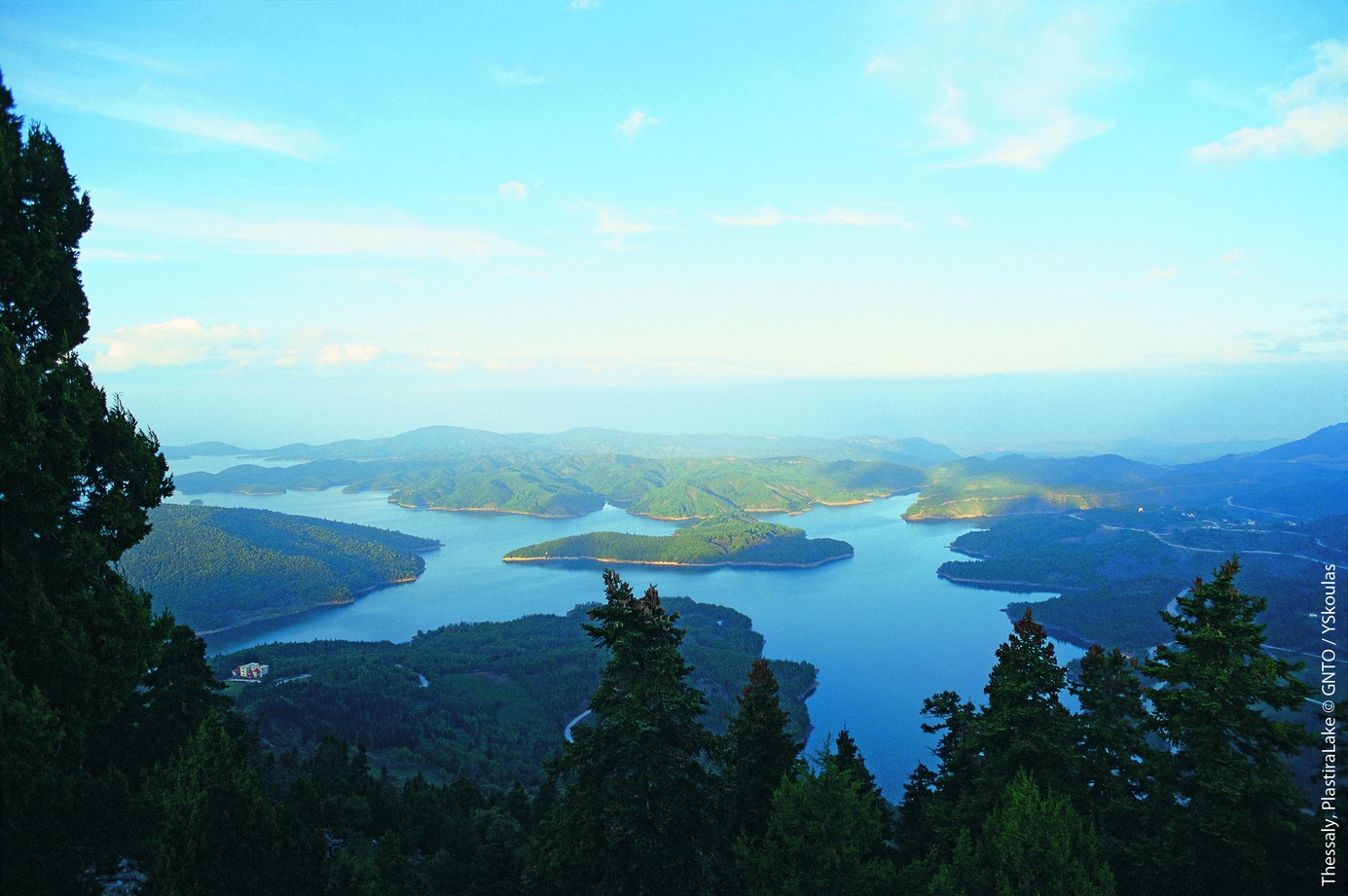 In autumn Thessaly can amaze visitors by its unique colours and natural beauty. For those of you who want to reach the adobe of gods there is only one place to be, Mt. Olympus. Wonderful nature of rich flora (over 1700 species, more than 20 of which endemic) and fauna (more than 30 species of mammals, 100 species of birds, 18 species of reptiles) left the modern Greeks with no choice but to proclaim it the first National Forest in 1938.

If you choose to go mountaineering on Olympus, you will find out that it is not only a divine experience, but also an option covering all levels of difficulty and stamina. Take the easy, the ones of medium difficulty, or the difficult to dangerous trails on the abode of the Gods! 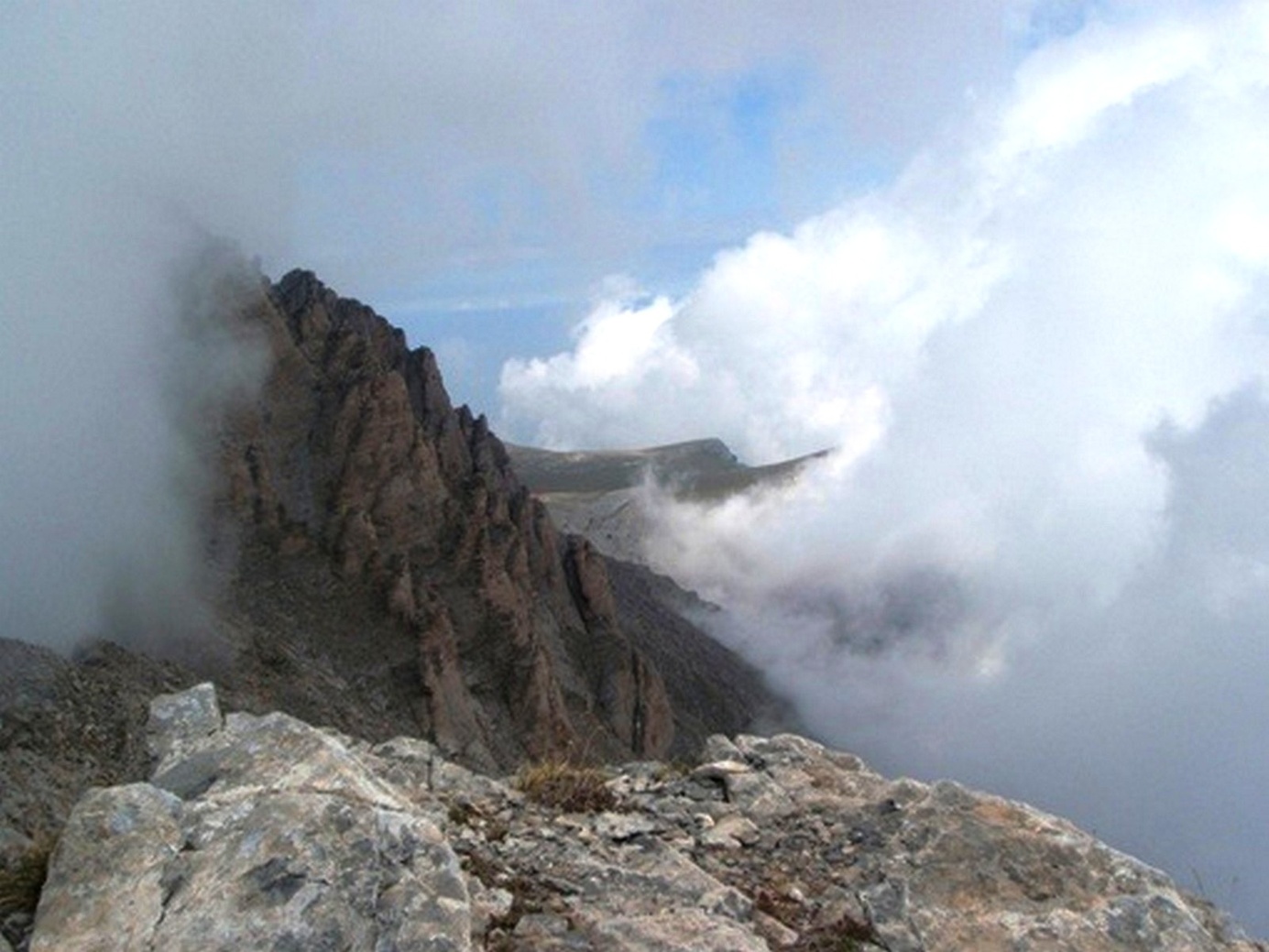